The Linnanvirta Event takes place in the centre of Kajaani, around the northernmost stone castle ruin of Europe, by River Kajaani. It is a park festival combining different forms of culture, activities for children etc. It’s a special happening aimed to gather people from and around Kajaani. Metsähallitus Parks & Wildlife (PWF) has facilitated the event and taken the lead from the beginning of its history. The event was organized for the third time from August 18th to 20th 2017 with the participation of about 20 PWF staff members.

In 2017, Linnanvirta was organized with the special theme of recreation in the wilderness, raising awareness of the use and protection of local green areas and engaging local people and communities. The newly established Hossa National Park along with other recreational and protected areas managed by PWF were introduced in the event. The ultimate target was to increase local ownership of these areas and to promote their sustainable use through engaging the general public, associations and other stakeholders. 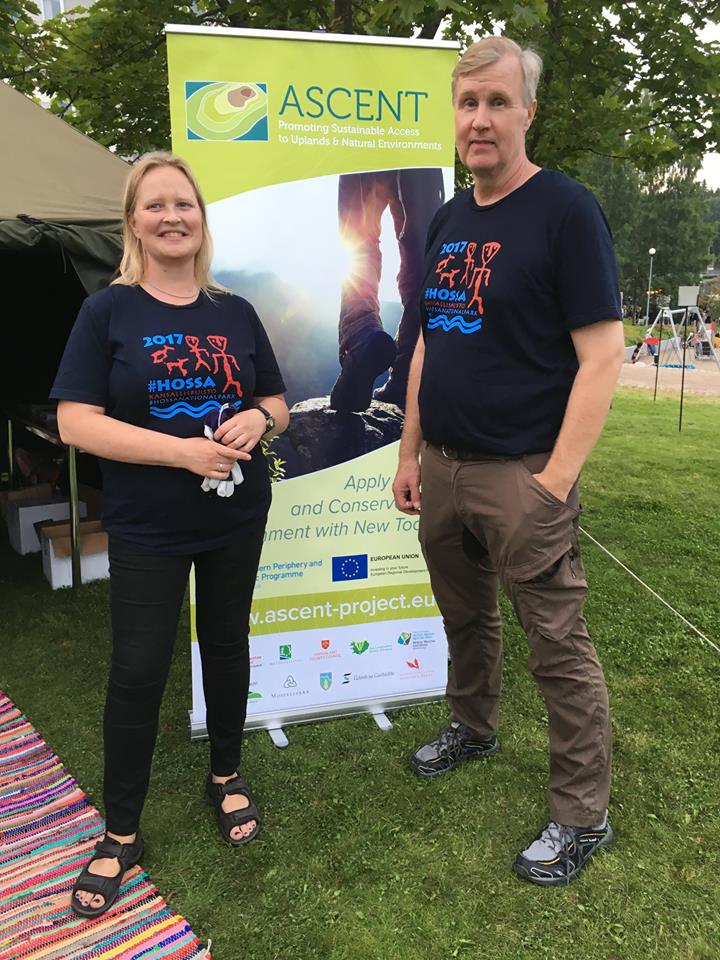 Along with PWF, dozens of individuals, groups, associations and other stakeholders were involved in planning and implementing Linnanvirta. They included e.g. scouts, artists of all sorts (dance, music, theatre), activity providers, Kajaani City, tourist guides, The Finnish Defence Forces, Kajaani University of Applied Sciences, local communities, schools, museums, restaurateurs, clubs and the local newspaper. In all, the estimated number of organizers went up to over 100 people. The event ran from Friday evening to Sunday.

Linnanvirta has become a well-known and loved event in Kajaani and many stakeholders volunteer to participate. In 2017, organisers were delighted to start planning activities and contents linked with the “green” theme of the year. Every organizer had their own expertise and therefore their own perspective. The variety of initiatives ranged from learning wilderness skills to staying under tent overnight in the city centre and from trying Stand Up Paddling to a guided tour by PWF staff on the nearby island of Ärjä (recently acquired protection area with special natural values). Children could try fishing and participate in a nature quiz along a short path through the event area and families were invited to learn about the flora of Kajaani town. Food plates with ingredients foraged from nearby lakes and forests and grown on local farms were prepared by restaurateurs.

The idea of inviting people to spend the night under tent came from a campaign launched for Finland’s 100th anniversary of independence. “Forest Hotels” were introduced during the course of the year around Finland to encourage people to spend at least one night a year outdoors.

ASCENT was well visible in the event. An information point was established where visitors could ask about PWF protection areas in the Kainuu region. Several experts from PWF were present to guide and talk with the public, as well as to introduce sustainable recreation. Hossa National Park was highlighted with a time lapse video and an animated film on the history of the area. Visitors were also invited to take part in a Hossa quiz measuring their knowledge on the nature and species of the national park. Visitors were very active and wanted to learn about recreation possibilities etc. Many wanted to share their experiences and tell stories from the olden times connected with the protection areas of Kainuu. An estimated 5500 people attended Linnanvirta, wherefrom approx. 800 were directly involved with ASCENT and the introduction of protected areas at the information point.

Organising Linnanvirta is included in activity T3.4 “Engagement with key users and stakeholder groups” with the aim of ameliorating an existing event and turning it into a forum for spreading knowledge on sustainability in recreation and the use of protected areas of the region. The platform created in earlier years gave the opportunity to reach a high visitor number that would not have been reached otherwise. Numerous new contacts were created between PWF, visitors and other organisers. Organising and planning the event was a joint effort with dozens of stakeholders. This was not only a target but also essential in creating an event of such scale. Linnanvirta was also an exercise to “explore new concepts for balancing tourism, cultural and economic interests with environmental needs” and “generate knowledge on the impacts on the environment, local biodiversity resources and promote civic pride of the environmental resources and unique local and cultural heritage” as outlined in the overall objectives of ASCENT.

The ultimate aim for organizing Linnanvirta with a “green” theme was to gather a large number of visitors and to generate a feel of pride for the local green areas. About half of the population of Kainuu region lives in Kajaani and these people are mostly the ones using recreational and protected areas – therefore the main target group of Linnanvirta. Ways to reach visitors were diverse – from handing out actual facts on conservation, recreation and the use of protected areas to a wide range of activities and cultural happenings. The idea was to bring the forest in the middle of the town and lower the threshold to try activities as well as to find out about possibilities for outings close to home. Nature and culture were tightly tied together – in the hope of generating revelations and experiences that would increase the respect people have towards the Finnish nature and its conservation. This tie was created through history, as well. An ancient waterway from Hossa through Kajaani and further to Oulu at the seaside was used to transport tar to the European market. Historical characters told stories of what life was like in the past. The cultural heritage in Kainuu is unique in many ways and as Finland has lived from nature for millennia, it is impossible to separate those two. Finns tend to have an emotional bond to their surrounding nature. Taking an emotional approach using arts as a medium is one of the most powerful tools of environmental education. It is a way to reach individuals on a personal level to remind them of the importance of nature in our lives and how it deserves our respect.

Approx. 5500 people attended the Linnanvirta event during 18th to 20th August 2017. It was estimated that approx. 800 of those were directly involved with ASCENT and the introduction of protected areas at the information point. This kind of visibility for ASCENT could not have been possible without the overall programme of the event weekend.

Linnanvirta aimed to reach people of Kainuu from young to old, from town and from the rural surroundings. They are the main target group using protected areas of the region. Hundreds of families took part in the activities.

Organisers were asked for feedback and they gave an overall score of 4,42 out of 5 to the event. Organisers were mostly happy with the variety of the programme, visitor numbers, the good organizing and the great ambiance of the event.

Positive comments dominated the visitor feedback during the weekend, although no feedback forms were distributed. ASCENT and the green theme of 2017 made Linnanvirta exceptionally popular and the ethos of “what you respect, you’ll want to care for” was well received amongst visitors.