The core of the ASCENT project is for shared learning – for path management knowledge and to transfer learning and best practice models among uplands sites.

The Errigal Stakeholders Group from County Donegal expressed an interest in undertaking a site visit to Croagh Partrick in County Mayo and to meet with their stakeholders to share experiences and discuss challenges on two upland areas located along the west coast of Ireland. A two day study trip was organised in conjunction with and hosted by Mayo County Council from the 17th and 18th of July 2017, the purpose of which was to ‘Share experiences and exploring synergies on two upland sites with common challenge’.

An engagement event took place on Monday evening at the Westport Civic Offices, attended by representatives from the respective stakeholders, staff from Mayo County Council and the ASCENT project team from the lead partner Donegal County Council.

Presentations were made by the chairs of the respective stakeholders groups: Mr Martin Keating from Croagh Patrick and Mr Charles Sweeney from Errigal Stakeholders discussing experiences, the key issues / concerns and how interventions are being addressed. It became apparent that in addition to the similar elevation (765m & 751m above sea level respectively), the quartzite peaks have common challenges, including increased visitor numbers, the condition of the mountains particularly the effect of erosion and the environmental impact, safety concerns, managing events and longer term maintenance and funding options.

Mr Paul Grady and Mr Paul Roarty from the stakeholders groups presented the challenges and solutions from their perspective. An open discussion followed which centred on the following topics:

In 2015 the Croagh Patrick Stakeholders were established with a common goal that to address the condition of the mountain, the impact of 120,000 visitors annually; 10,000 of which climb the Holy Mountain on Reek Sunday in July.

The Stakeholders are made up of representatives from a broad and diverse range of sectors, including the Church, Mayo County Council, Croagh Patrick Archaeological Group, two main adventure providers, South West Mayo Development Company, Murrisk Community,  Tourism bodies, Mayo Mountain Rescue, Mountaineering Ireland and the Shareholders and chaired by a representative from Mayo County Council.

The Errigal Stakeholders Committee was established in 2012 to consider and investigate options to address the ongoing erosion and condition of Errigal Mountain due to increased visitor numbers and unregulated access.  The committee has adopted a partnership for balancing tourism, cultural, social and economic interests with environmental needs to ensure the long term sustainable management for Errigal Mountain.

It was identified that indemnity continues to be a significant issue. There are approximately 7 commonage owners on Errigal and 46 on Croagh Patrick. Croagh Patrick stakeholders sought legal advice and decided that the best option was to lease the area involved to a company limited by guarantee, which is made up of a number of stakeholders.  Its aim is to protect the stakeholders by law and for the lease of the land from the shareholders (for an unknown term). Permissive access is supplying permission to cross land but is open to a single shareholder blocking access for all.

60% of the shareholders on Croagh Patrick have consented to a lease to a company limited. The landowners in effect retain the right to farm and access but with no liability. It is envisaged that the lease would allow for more control over the mountain and a means of exercising control rather than enforcing it.

There were shared concerns expressed in relation to managing sporting and charity events. It was suggested that each event organiser should assess their own event in accordance with Mountaineering Ireland’s guidelines and outline if there are any adverse effects. Additionally, education and awareness raising activities and the inclusion in a Management Plan are key to controlling events, although it was recognised it is very difficult.  A self assessment of events is being looked at by both sites asking event organisers to comply with guidelines and the management plan to be developed.

With path management being an ongoing process beyond just capital investment, funding for longer term maintenance will be needed. It was recognised through volunteers and local retention of skills for maintenance works, this can be achieved for upland sites. Croagh Patrick Stakeholders are working through Fáilte Ireland who have indicated support as have the Department of Community and Rural Affairs in relation to a capital project.

Errigal Stakeholders through the ASCENT project have received funding through the Interreg NPA programme for learning, designing and trialling a sustainable solution for Errigal mountain. Funding for capital works will be investigated through European funding stream including LIFE, Interreg etc.

Collaboration between both upland sites has the potential for raising issues at a national level and to explore future funding options for capital and maintenance works.

For the Visitor Management Plan at Croagh Patrick, each user group (adventure groups, the church etc) were asked to outline their concerns and their proposals. All responses will be collated to form basis of the Management Plan.

At Croagh Patrick, there is car parking on site. Mayo County Council allocated a site to the Murrisk Developement Association established in 1994 as a voluntary community group build a small community centre which incorporates a cafe. They along with the Mayo County Council maintain the village including the famine monument, development centre, car park etc.

The Errigal stakeholders saw firsthand in Scotland, that a designed path is a sustainable solution as it allowing climbers and walkers to be kept on the path and with foliage and rockery in path borders, particularly in vulnerable areas is an effective intervention.

At Errigal, the car park built in the 1980s has approximately 20 car parking spaces available. The location of the car park has in effect concentrated hill walking along a number of routes on the eastern side of Errigal. There are no service facilities at Errigal. A viewing area was constructed in 2016 further south on the R251 towards Dunlewey.  As part of the ASCENT project a Management Plan will be developed for Errigal Mountain and the Dunlewey area as well.

The site visit was designed to give an insight into the challenges which Croagh Patrick is experiencing, including the widespread and significant damage caused by the impact of growing numbers of recreational users on the natural environment. 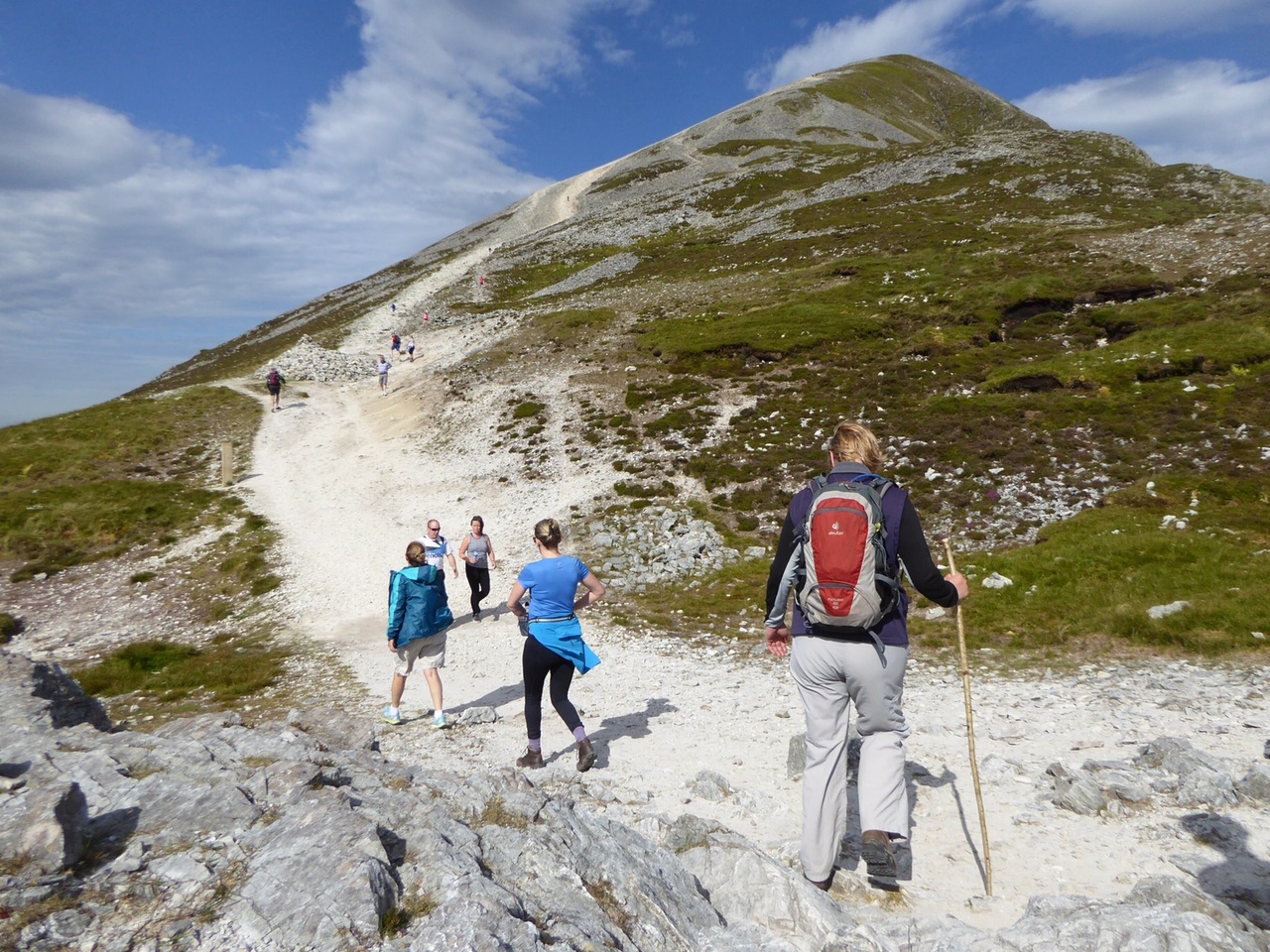 The Car Park in Murrisk applies an 80c per hour charge. The carpark generates approximately 70-80k/year 25% of which is allocated to the local community, which are used for maintenance, supports the cost of running the car park and for essential clean ups there.

There is also a visitor centre and toilet facilities which are maintained by Mayo County Council. The proximity of the car park and visitor centre in relation to the mountain has greatly influenced the number of visitors there.

Pedestrian counters have been installed beyond the car park and below the summit to track visitor numbers. An Information leaflet, a route map and signage to assist climbers in their ascent to the summit has recently been launched.

For Croagh Patrick, the aim is to achieve a long term sustainable approach for Croagh Patrick. A condition assessment has been completed and the intention is for  a single path designed to withstand the pressures of increasing numbers to the Reek and especially for the  ‘shoulder’ of the mountain where erosion is very apparent.