Featured on the BBC’s ‘The Chronicles of the Mourne’,  Katie Taylor from Mourne Heritage Trust’s Path Team talks about the opportunities that ASCENT brings to repairing and  protecting the sensitive landscape on Slieve Donard in Northern Ireland. 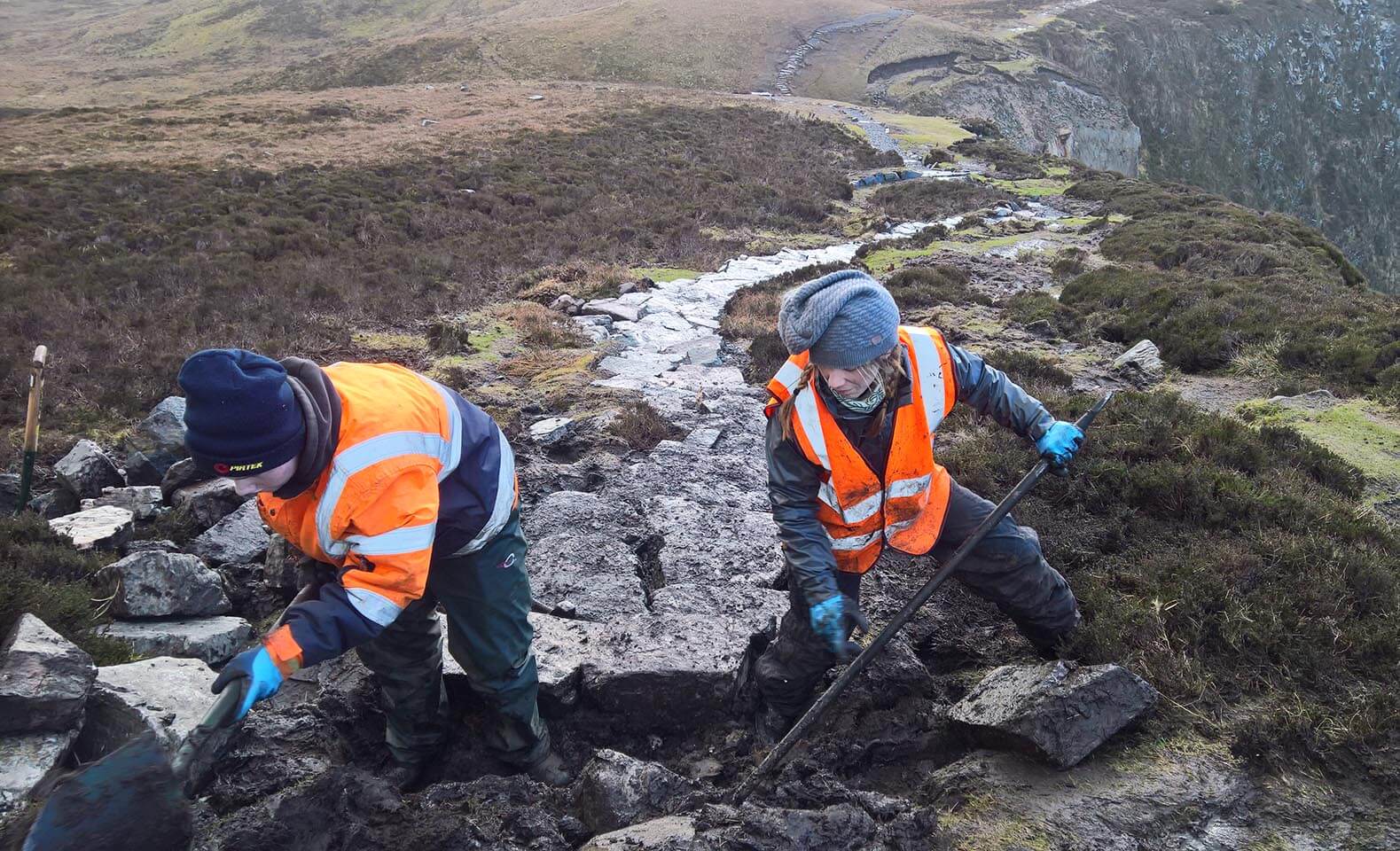 From growing up in Northern Ireland in the town of Newcastle, I had the privilege of spending my childhood exploring the paths and peaks of the Mourne Mountains, and like most people from the area; I considered the mountains to be a strong part of my identity. Working for the Mourne Heritage Trust was therefore a great privilege for me, and becoming a member of the ASCENT team more so. Our key responsibility was to explore and overcome the challenges which face the most popular mountain to ascend, Slieve Donard, which is the highest peak in Northern Ireland.

The Glen River trail from Newcastle is the most popular route up to the peak, with over 90,000 visitors ascending the mountain through this way. The path is popular with hikers, runners, walking groups, challenge events, sponsored walks and everything in between, on a sunny day the path can look like a highway, with lines of people visible from miles ahead all making their way to the top.

Our challenge was to reinvent the highly damaged existing track, into a robust path capable at withstanding the visitor pressures, while also maintaining the natural, rough look which drew so many people along its trail.

While the work was daunting, I was gladly not alone! In fact I am absolutely the least experienced in the team which consists of Phil Savage, the Lead Officer, who has over ten years of experience building trails, Dave Farnan, the ‘mountain man extraordinaire’, and of course the volunteer team whose knowledge of path work is almost as formidable as their shouts of “Stay on the Path!” if a hiker strays off trail in their view!

Since 2016 we have been meticulously working our way up the Glen River trail, using hand tools and tried and true methods to restructure a hardy trail up to the peak of Slieve Donard.

Although many people express envy at our job on the bright sunny days, the trail work doesn’t end with the summer. I think we all recognise the importance of our work, protecting the sensitive heathland habitats and unique landscape of the river valley, and that’s what keeps us working so hard all year around, even when the wind is blowing our shovels sideways, and you have to clear the snow from the path of ground you’re working on! We are all passionate about our work, and are delighted by the opportunities ASCENT has brought to fund the constant effort needed in the Mournes.

Mountains have a unique way of inspiring people, and the feeling of reaching a mountain top is like no other. But although the peaks on top look sturdy and stable, the habitats within are not! All ASCENT partners face the same pressures from visitors, changing climates and new threats, however the progress of this project has left us hopeful for the future as we work together to achieve sustainability for our upland areas.

The Chronicles of the Mourne