Compiling a management plan for the newly established Hossa National Park started in early 2018 and the first public event was organized on April 12th at the Hossa Nature Centre as part of the participatory process. The event was advertised in three local newspapers and on the Internet to invite members of the public interested in the management and future use of Hossa, to attend. The turnout was good, with nearly 40 people attending. Most of them were locals and entrepreneurs; some cottage owners and officials from the municipality attended, as well. Nine Metsähallitus Parks&Wildlife (PWF) staff took part to present their field of expertise and to answer questions. The main aim was to gather ideas and to listen to what the local community had to say.

Organising public events in connection with a range of planning projects is a rule within PWF. Another public event will be organized later in autumn, once the work has progressed more. At that point, the public, authorities and other stakeholders will be asked to comment on the draft version of the management plan. It is emphasized that PWF wishes communication between the public and PWF to be continuous and comments are welcome at any point of the planning process.

The event started by a presentation on the process of management planning in Metsähallitus with an insight to the topics of the plan. PWF staff presented the contents of the first chapter, that is the current status of the National Park, from their respective perspective: nature conservation, cultural heritage, recreation and tourism, fishing and hunting.

The most discussion was raised on fishing, especially from the point of view of programme services. The use of motor boats in the national park was discussed and people wanted to know details on how fishing has changed since the national park was established and what permits were needed. Some changes have already been made owing to what was suggested in the event.

The use of snow mobiles was discussed thoroughly, as well. The entrepreneurs operating in the national park pointed out their need to use snow mobile tracks in the future, too.

Other topics concerned better services for hikers at the nature centre, the use of quad bikes for fetching game, the restoration of a historical path from a nearby village through the national park and forestry activities near a recreational path leading to the national park.

A planning process is on the way outside the national park, and an update on the progress was given by the head of planning of Suomussalmi municipality. 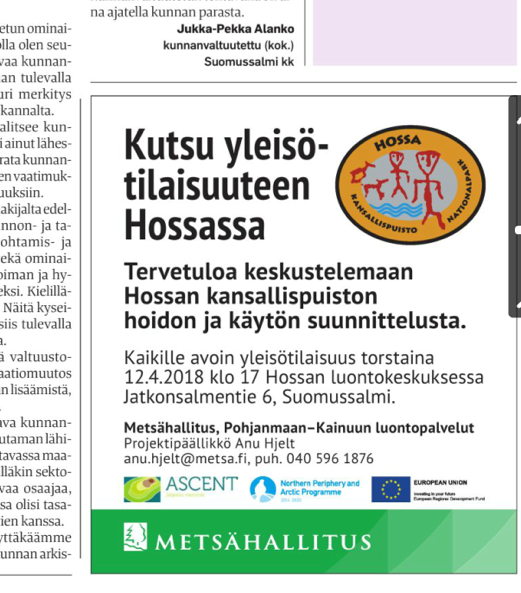 Advertisement in the local newspaper Ylä-Kainuu on 6th April.